I JUST DID SOMETHING FOR THE FIRST TIME! 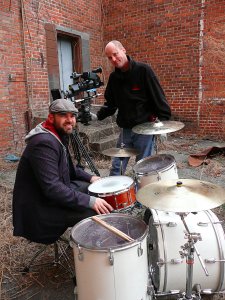 In 25+ years of being in the production industry I have never worked on a student film. I didn’t go to film school (business school with a marketing / operations management degree instead) and since there were no film programs there I never had the opportunity.

Besides, who wants to work for untold hours for free…

But when Tony Cece (who worked as BB Electric on First Landing with me in ’06) told me about his project I got interested.

Need To Breathe & Regent University had been talking about a student effort to make a video for their song Washed By The Water (#22 on the CCM charts this week). Tony was chosen as the director. I told him I thought I had the production days free and I asked him if he needed any help.

We decided that this would be a perfect chance for me to shoot with my new Sony EX1 and new 35mm adapter on a “real world” production.  After all you can only do so many “tests”.  The pressure of a real production is the only way to really know if equipment, processes, and workflow will… well, work. (rain, multiple locations, small crew, etc added to the “production realism”)

We agreed that I would be the “B” camera as he planned to use the Silicon Imaging 2K as the primary camera. (For reasons too long for here… me & my set-up became the “A” about 2 hours into the first day.)

The premise of the video and the lyrics required rain.  And we had lots of real rain!  The Regent Master’s students were great. The band was super & had a real handle on image making with many creative ideas.  I HAD A GREAT TIME!

This has been such a great experience that I look forward to a similar experience soon.  Tony, I can’t wait to see what you put together!  I’m sure the band will be pleased as well.

The picture above is my with the EX1 and 35mm adapter on my Porta Jib Traveler with Joe Stillwell, drummer.

UPDATE: here are a couple of Tony’s emails within the first 48 hours of post production:

email #1
“WOW! Jon, What can I say but WOW!? Your shots are amazing! They are stunning to look at on their own. Thanks again for everything.”
email #2
“You are my hero! Jon, I just stumbled across the time lapse footage. It is very surreal! I love it. I need to use it.”
email #3
“So I’ve started editing the video and have put in both timelapses. They are great! At this point in the rough, about 3/4’s of the shots are from your camera. I love the look. I added a slight bleach bypass to it at this point. I may revert back to the original color from your camera and try to match it with the others. I’m still up in the air about it. Looks really good though.”

UPDATE February 26th: here’s another email from Tony:
“The band liked the overall, I’m making a few corrections that they wanted and then will color correct.”
“The rest of the footage doesn’t compare to the use of your lenses.”
UPDATE March 6th: here’s another email from Tony… THE VIDEO IS FINISHED!
“Well, they wanted the effects.  Then I got a call that said we needed to get them a video to approve tonight.  I got done on a shoot about 8pm and had to have it finished by 11pm.  We made it with 3 minutes to spare and lots of stress.”
“The reason it all became so rushed is that they are sending it to Interlinc to be put on a Christian Music Video compilation DVD.”
“Anyway, just wanted to keep you in the loop.  Hopefully you’ll see it one day and be like… “Hey, I shot that cool footage””
Tony, I feel that way already and all I’ve seen is the small approval QT’s you posted to the FTP.  Again, great job!  This alone should get you your Master’s degree tassel!