MULTI-CAMERA IN A HOUSE 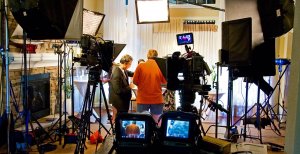 Some days I’m amazed at the end of a shoot at just how much equipment we actually used. Non-production folks are always asking me why production takes the time that it does and why it takes so much equipment. My comment is that it used to take much more equipment in the past.

With the technology advances in imaging and lighting, it takes less equipment now but more at the same time. In years past the lights needed were more powerful. Now each light might be one of less intensity yet we need more control and precise illumination because the cameras see more. (And that’s before we talk about 16:9 images…)
This week the second part of spots for a national woman’s beauty product line.
Multiple cameras with teleprompters. Multiple talent on the set. Of course testimonial areas and product shots as well.
Another million dollar + house as the location. Three SUV’s and a rental trailer’s worth of production gear. It didn’t seem like all that much until the wrap after a four-day shoot.
Once agin my Barger 6 Lites with Medium Quartz Chimeras worked like a charm. With Softgrids on the front of the Chimeras I was able to use the inner baffle and Chimera cloth diffusion on the front of Medium Quartz Lightbanks and have more than enough illumination to project 10’+ as we cross keyed the talent.
Remember, this is a multi-camera set-up so the spacing on the sides of the image necessitates the lights being much further away from the talent than in a normal interview situation. Most of the time we were using between three and four of the 6 lamps on the Bargers.
Plus, having three legs of electric supply for each Barger made using standard house power possible for this production. This was a plug-in only production.  No generator.  No tie-in.  We did use my dryer AC distribution distro.  Still it’s all plug-in only.